the IT world will be a container shipping industry

If we look at the current IT world we can see that people want to move their infrastructure, services and business into a more cloud environment, because running yourself those datacenters can be such a headache, expensive and honestly, IT is now fully commoditized. But “the cloud” is nothing new, it’s just the evolution of virtualization and distributed computing made right. Which is a still a big step for a lot of companies that use monolith systems.

Running infrastructure is not easy. We need to deal with hardware, network, a/c, operations, disaster recovery, sysadmins and a lot more underneath that people don’t realize. So when there’s a chance to outsource it to someone who can do it better than us, we’ll do it. That’s when hosting and managed datacenters appeared. Yet we want to move faster, simultaneously, concurrent and we needed help to creating one huge managed cluster. So, cloud was born.

Still, one of the problems that we didn’t sorted was how to move infrastructure in a fast, easy way and completely agnostic of the provider. If we top that with the need to merge developers with sysadmins (devops), then we need new tools and services to create this new infrastructure. So we call that containerization.

I already talked about docker here and here, but recently Google announced the quantum leap for it. They are using 2 billion containers per week, everything is running in a container and they call it “Let me contain that for you“.  More details can be found here “Containers at Scale” from Joe Beda. This is pretty much chroot with steroids and done right. The last time I worked with it was running a large operation of Solaris, back in 2004 and we used zones. It’s interesting to see how 10 years after we’re getting back to it again. 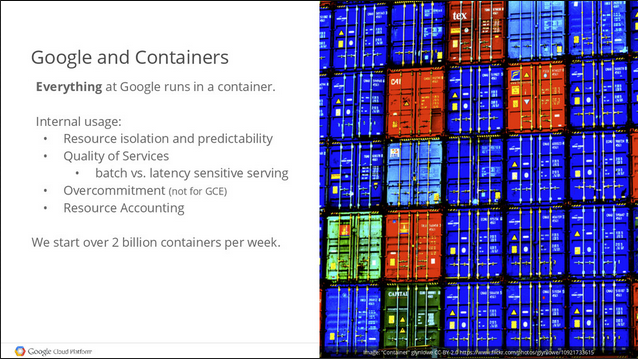 So, a container is a weathering steel box with standardized dimensions, which can be loaded and unloaded, stacked, transported efficiently and transferred from one mode of transport to another without the need to be open. This is going to be pretty much the picture for the next IT world. We’re not going to care about who’s going to transport it, load or transfer as long as we do it in a standard mode, keeping our stuff safe inside and sealed.

Jira, the favourite tool of bad managers
how microsoft changed
first they fight you, then you both win