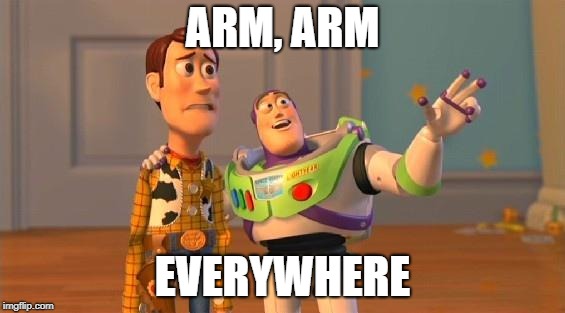 ARM’ing for the future developers

It’s no news that the ARM platform created by Qualcomm is quite amazing. Specially for phones, where Android operating system raised to the most used system in the world, but also towards new devices (as tablets and laptops).

ARM laptops feel like the late 00’s laptops that were dedicated to web browsing and education with Intel Atom processors or even worse. They didn’t survived long, as phones were more powerful and none could actually deliver what normal Intel/AMD laptops could deliver. In fact, the idea of a browsing laptop was surpassed by Apple with the iPad that wants to be a laptop. They built their own processor and some say it’s even more powerful than the laptops. The question for Apple is when do they create one single platform for laptops and tablets.

But leaving that theme for another time, there are some interesting news that show ARM as the future platform for both laptops and phones, as well for the datacenter.

These news shows how the market is clearly moving to having one platform where Microsoft and AWS is aiming to. The developers.

Not the current developers, but the next generation developers. The ones that want to developer for both the datacenter (AWS and Azure), use their laptop to test and phones to use. With Universal Drivers, Microsoft guarantees unification for platforms, with Edge /Chromium) working on ARM it guarantees a platform for the web and with ARM laptops, assures that what we develop on our laptop will work on the datacenter. AWS already recognises ARM as their next platform, the next step will be developers.