#lamps of #london🇬🇧 at #trafalgarsquare

cherry on top, with a drone and a fly #trafalgarsq

come to the dark side. we have cake. #starwars #st 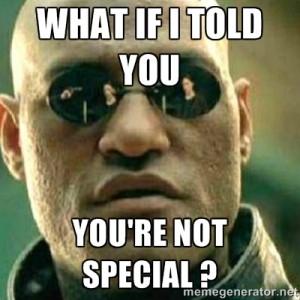 When you work for the public sector, there’s this need to create your own walled garden and make yourself the guardian keeper of something. It might be some sort of technology, system or application. It’s a status that you need and create to keep yourself useful within the system. The more dependent people are of you or of your technology, the best for you, but it’s the worse thing that may happen to the entire organization.

Usually after being the guardian keeper of something, your next step is to create a long tail of people working for you, doing repetitive tasks, not creating value, but working to keep the garden away from other people or even not improving it. The more people the merrier. Your area is then a big blob, sipping resources out of the organization, just to do keep that walled garden alive.

This not only happens with the public sector, but also within the private sector, with some small subtle changes. There everyone thinks they’re special, that have special needs and therefore need special software or solutions.

Lets take invoicing as an example. Everyone needs to invoice customers. It’s a standard, pretty much commoditized function across the company. The department A might want to charge customers in pounds, and department B in dollars, but at the end it’s an invoice, with some changes between departments. Now because everyone’s thinks they’re special, every department picks their own invoicing system, because they have special needs (subtle needs at the end and straightforward customizable into the software).

After a while, you’re going to have two or more different invoice systems across the organization, doing pretty much the same thing, but because everyone’s special, these invoicing systems don’t talk to each other or even sync data. They were not chosen to do that, if they would, then someone will notice that after all it’s not that big deal what people think it’s special. Now you need different teams to support the software or have different suppliers for it. It’s your own walled garden and you’re going to get someone to be the gatekeeper of that thing that you think it makes you special.

But, news flash, you’re not special. Your need is shared across your organization and “your need” is just a custom field into some database. You don’t need different software to do a commoditized function. After a while, instead of doing invoicing for your customers, you’re going to be the invoice of your suppliers.

So, how to overcome this ?
Well, first of all it’s a mentality thing. You need to explain to people that all commoditized needs should be shared across the organization and instead of asking how people are doing their own tasks, tell them that 90% of what they’re doing is shared and those 10% might be just a custom development, easily achieved with the current solution. Also, soon you’re going to realize that those 10%, might be some change into the process or procedure that you’re doing wrong across different departments.

Another thing that keeps everyone out of walled gardens is having a common set of rules and principles regarding choices. If someone uses a shared invoice system, then its from the organization budget, if they’re using their own, then it comes out of their own budget. Also, having the principle of sharing data across different systems and keeping them synced is usually a turn down to get new special tools. So if someone uses a different invoice system, then they will need to integrate with the shared across the organization, out of their own budget.

At the end is about having tools for capabilities, not capabilities for tools and having common principles and rules across the whole organization.