Sometimes I get asked if companies should have more than one technology supplier (to have discounts) or a bunch of them (to have choice). It’s indeed a matter of efficiency vs choice, but also cheap vs expensive. Lately I told a company that they first need to have less suppliers to achieve efficiency and reduce costs, in order to have in the future the opportunity to have more suppliers and then more choice. Also told them that they weren’t ready to have that many suppliers now because they weren’t managing the procurement process properly, which needed to be revised.

So, on the news, Google rumours that they’re sourcing HTC for their new Nexus tablet. If we look at it, Google has the choice to have their software in every device, but they choose just one to be their favourite supplier, each year. They’re not going with more than one official supplier at a time, but they have the chance to pick any manufacturer that already produces android phones. 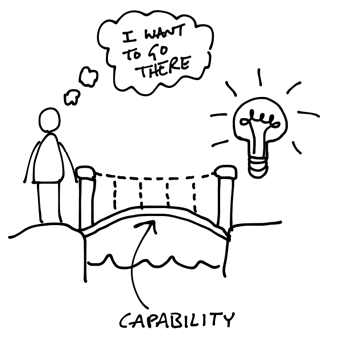 he difference then with Google and any other mortal company ? Well, first of all they defined a capability that they need to fulfil: make a phone to put their content on and gather data from consumers. Then they have a tender each year with different manufacturers, which is pretty much like a partner meeting, to align commercial, marketing and sales strategy. Technology aside, we all know that their system works, but announcing a new device is a great deal and a revenue stream for any manufacturer.

If Google can change suppliers every year for their phone, so can your company for the different capabilities that you have.

And how ? Well, Google does it with a common set of interfaces and standards around their platform (Android), so you can do it too with your own capabilities. Let’s pick one; your website. If you define that your content is provided by an API, that UX/UI should be using web standards and all the data gathered goes again to the API, then you can literally pick one different supplier each year to do your website.

With the Google approach you can have choice; it can be going with one supplier or with as many as you want, because you have your capability well defined, set with common interfaces, standards, rules and principles.